You are here: Home › Solstice reflections
December 18, 2019 in News 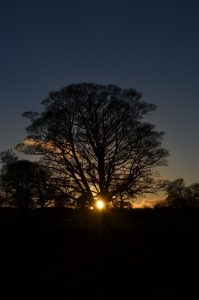 As we approach the Winter Solstice, the shortest day of the year and the longest night, it is a good time to pause and reflect. The Solstice also marks the turning of the year, a rebirth, the return of the light and lengthening days. In addition to looking back, we can therefore also look forward.

This year climate change and its impacts on land and wildlife have featured prominently. The Intergovernmental Science-Policy Platform on Biodiversity and Ecosystems Services (IPBES) reported in May that Nature is declining dangerously at unprecedented levels with over 1 million animal and plant species threatened with extinction. The UK’s own State of Nature 2019 report indicated that 41% of our species have declined in abundance since 1970. The reports cite the impacts of climate change and intensive agriculture as key pressures.

There are signs of change. The UK government amended its legally binding target to reduce the country’s greenhouse gas emissions to net zero by 2050 and an increasing number of local authorities have declared a climate (and some an ecological) emergency. However, frustrations at the slow pace have been shown in the growth of movements like Extinction Rebellion and the Schools Climate Strikes. The recent compromise outcome at COP25 in Madrid has done little to assuage many of these concerns.

Agriculture is responsible for about a third of greenhouse emissions and there is a clear need to address these impacts both in climate change and wildlife terms. The Intergovernmental Panel on Climate Change (IPCC) highlighted the important role that sustainable land management can play in helping to counter the impacts of climate change on land degradation. Both the IPCC and IPBES, along with the UK’s Climate Change Committee, have highlighted the need for transformative change at every level in order to achieve the shift necessary to move to a more sustainable future for the planet.

As I have highlighted previously biodynamics has much to offer here. Its emphasis on maximising the health and vitality of soil, food and people, increasing and respecting wildlife on farms, while helping to store carbon, can help to bring about a more sustainable farming future. By bringing all these elements together it is possible to achieve transformative change in a short time.

Two great examples of transformative change are the Biodynamic Land Trust’s projects at Huxhams Cross Farm near Totnes in Devon, and Oakbook Farm in Stroud, Gloucestershire. The land for both projects was purchased with community help in 2015. Within four years both have gone from bare land to vibrant community-connected farms providing healthy produce for local people. There is also cross-pollination between the projects with Marina O’Connell, the farmer at Huxhams, recently facilitating two planning sessions at Oakbrook as the farm develops into its next phase.

It is inspiring examples of planet-friendly farming like these that will help encourage others and, in turn, move us into a more ecologically sustainable future. The Land Trust looks forward to the further evolution of both farms next year as well as continuing to nurture new projects.

If you are able to make a donation to help us in this work then you can now do so very easily on our website.  All donations are very much appreciated.

View all posts by Tom →